Players expecting fireworks in the MCB Tour Championship.
The last three MCB Tour Championships have all witnessed something very special in the final round from the eventual champions.
In 2017 Thailand’s Thaworn Wiratchant thrashed a brilliant 10-under-par 62 to turn a share of the overnight lead into an eight-shot Sunday triumph.
A year later American Clark Dennis was three strokes clear of the field heading into the final round and a last round 64 left him, just like Wiratchant, fully eight blows clear at the end of the third and final round.
In 2019 Sweden’s Jarmo Sandelin faced a different prospect. He was four shots behind the leaders, but produced a magical 65 on the last day to claim a three-shot victory. 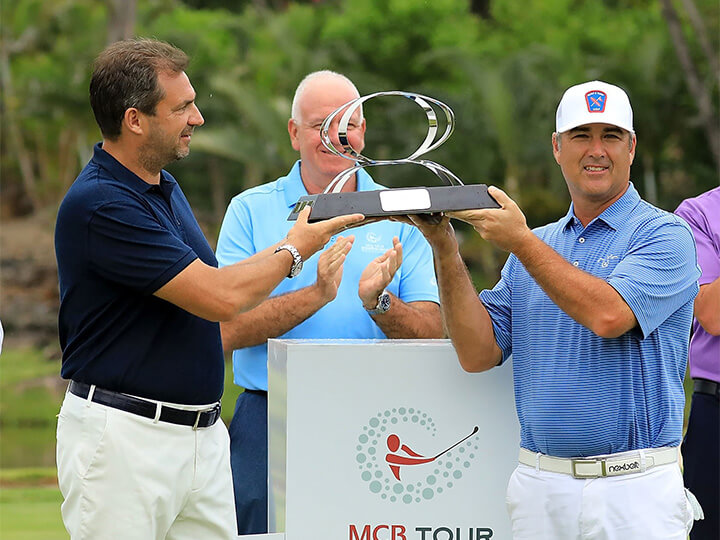 Can we expect more fireworks from the field this year?
Frenchman Marc Farry, who is attached to Constance Belle Mare Plage and therefore knows the Legends Course intimately, believes so. "Playing at this time of the year, rather than just before Christmas might have an effect on scoring conditions,” he said at the pre-tournament press conference. “You know, I think we could see some of the best scoring we’ve ever seen.”
Alongside him, Sandelin reflected emotionally on his victory two years ago.
"I hadn’t won anywhere in the world since 2001 in Asia,” he said. “That was a lot of hard work and a lot of knocks in-between wins. It was lovely to lift a trophy again and to do so here was extra special. It’s a really good course for me. I’m not the longest hitter, but I have a great short game and you’ve got to be good around and on the greens here.”

Ahead of the Legends Tour’s 2021 season finale, the players took to the Links Course for Wednesday’s Constance Hotel Pro-Am.
There was triumph for the team of Paul Wesselingh in the net competition (Andrew Milton, Philip Taylor and Mark Cridland) while Carl Suneson's team took the honours in the gross (Nicholas Hyde, Mauro Biscuoli and Federica Biscuoli).

Meanwhile, in the Amateur Trophy which concluded on Tuesday 29th, there was victory in the ladies gross event for Germany’s Ann Kathrin Nahl and in the net even for Lene Bojesen. Nahl had been trailing the leaders heading into the second day but powered past the field with a dominant second round performance.
In the men’s category one competition, Guilaume Graffeille took the top spot and Emmanuel Corneillet second place in both the gross and net events. David James completed another double in category two, claiming the win in both formats.