There were big smiles on the beach at Constance Belle Mare Plage on Sunday morning
as Stephen Dodd lifted the John Jacobs Trophy.

Awarded to the player who ends the Legends Tour season ranked number one in the Order of Merit, the Welshman finished on 1830 points and was well clear of Frenchman Thomas Levet who was second on 1435.
“It feels great,” he said. “When I turned 50 five or six years ago it was a goal of mine to win the Order of Merit, so it’s nice to have achieved that.”
A three-time winner on the European Tour, Dodd claimed the biggest win of his career in last summer’s British Senior Open.
That major championship success has opened doors for him, earning full playing rights in America on the Champions Tour, but he had no doubts about returning to Mauritius in his quest to land top spot for 2021. 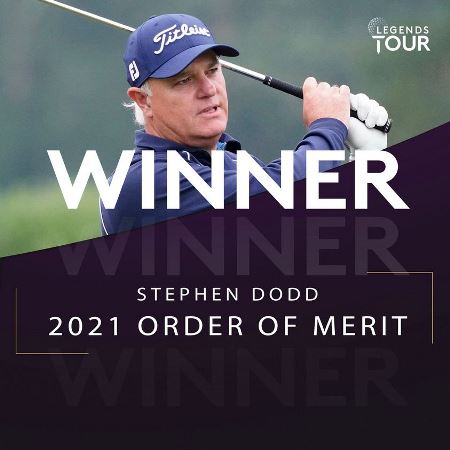 “I actually played very little running up to Sunningdale for 18 months and I was probably just as surprised as the next person that I had achieved what I did, but clearly excited at the same time,” he said, reflecting on his win.
“I had played a little bit back at home but not competitively so I had no expectations going in. I felt like I had no pressure on me, nothing to lose, and fortunately for me, it all came good.
“When I had the chance to win I just wanted to give myself the best opportunity. You never know when these things come along if they ever do come along.
“I just tried to grasp it and that’s what I did.”
The new season, and the race to succeed Dodd, start in May.

Unexpected weather conditions halt today’s game. Action in the first round resumes at 8 am on Saturday morning.

Thomas Levet is all set for his hat-trick quest in the rescheduled 2021 Legends Tour finale here in Mauritius.