Golf Lovers, the Indian Ocean is your destination

Indian Ocean Swing
In 2018, the MCB Tour Championship was expanded to two events in the Indian Ocean. The first took place in Mauritius at Constance Belle Mare Plage, a European Tour Destination, and the second stage saw the first-ever professional tournament played in Seychelles at Constance Lemuria, to bring the 2018 season to a close.

This year will mark the ninth time Constance Belle Mare Plage has held the MCB Tour Championship with Constance Lemuria returning for a consecutive season, but unlike last year Constance Lemuria Seychelles will host the first leg of the championship before Mauritius closes the season the following week.

The Englishman’s success in Seychelles came in a dramatic play-off, defeating 2002 Ryder Cup hero Phillip Price on the first extra hole, holing a 30-foot eagle putt from the edge of the green to claim his first Staysure Tour title in more than six years.

Picturesque setting
When it comes to idyllic golf courses, Constance Belle Mare Plage and Constance Lemuria top the list on the Staysure Tour. Crystal blue ocean views and white sandy beaches are the backdrops for several iconic holes across the two venues, no more so than the par three 15th hole at Constance Lemuria. 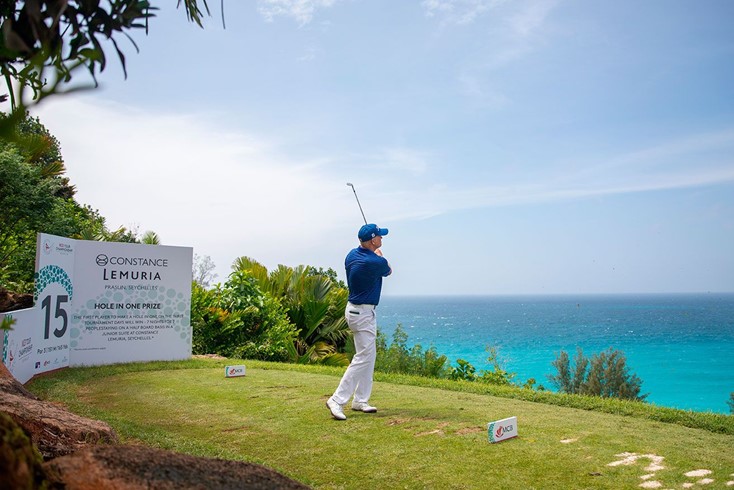 Players tee off from an elevated tee, which looks out across the Indian Ocean, before dropping down to the green from 165 yards, arguably one of the most spectacular par threes in the world.

Colin Montgomerie and Barry Lane kept the title in the British Isles with their victories in the following two years, before Thaworn Wiratchant became the first Asian winner of the event in 2017, and last year saw the title return to America following Clark Dennis’ record-breaking victory.

John Jacobs Trophy battle
It is not only the MCB Tour Championship – Mauritius and Seychelles titles plus the Indian Ocean Swing trophy which is at stake in December. Awarded to the player who tops the season-long Staysure Tour Rankings, the John Jacobs Trophy is also awarded after the two weeks, with Paul Broadhurst lifting the trophy last year. It was the second John Jacobs Trophy win for the Englishman following his previous triumph in 2016, while Dennis capped off a stunning rookie season by claiming the title in 2017 with Montgomerie winning back-to-back awards in 2014 and 2015.

If you want to brush shoulders with Pros Golfers, register now!