Among the list of imposed products to be used for the winning dish/recipe,
one of the pre-requisite for our Chefs is to prepare the spices in the traditional Mauritian way – by using the ‘’Roche Cari’ or ‘Ros Kari’.

Here’s an in-depth story with all the spices about this very important traditional mortar that our Chefs will use for Festival Culinaire Bernard Loiseau.

Essential for making tasty dishes the Roche Cari, is a thick and flat rectangular mortar which has a special place in the culinary heritage of Mauritius. It is made by stonemasons using tools such as the hammer, the chisel, the sander and the saw to work on the rocks that were easily available in earlier days in cane fields around the island. The surface of the mortar is further traced with fine horizontal grooves, evoking the lines of a school copybook, to enable it to have a grip on the dough that is being crushed on it. A newly made Roche Cari cannot be used on the same evening, for it to be in good condition for use, leaves must be crush on it every day for 3 or 4 weeks to completely remove the dust that remains on its surface. The Roche Cari always works hand in hand with a 'baba Roche Cari’ - a small cylindrical roller of about thirty centimetres, also made from cut stone, that is used to pound, grind and crush various condiments on the mortar. 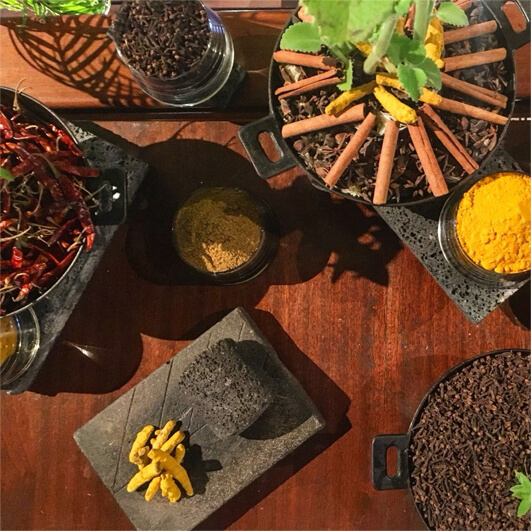 asIt is believed that it was the Indian immigrants who introduced the first Roche Cari when they first landed in Mauritius during the nineteenth century, perpetuating handmade preparation of the masala of their homeland to which they were attached. Over the years, the masala curry h become a popular dish for all Mauritians, and there was a time when virtually all Mauritian families had a Roche Cari in their yard. It rested on a stand made of bricks or fixed in concrete outside the house, often against the wall not too far from the kitchen but never inside, possibly because it had to be washed after each use, but also probably because of the strong smell of spices that emanated from it. However, when placed outside, the flavour of the curry never failed to reach the nose of the neighbours who would sometimes look over the fence and say:  "Hmm... Parfum la vantard hein ! Bon cari kot ou zordi, sirma enn cari poule dan masala sa! (Hmm... This smells so nice! You are cooking a nice meal tonight, probably chicken in masala! "

It was also regularly used to crush coconut, grilled first on a charcoal stove, that was then used to make a satini coco (coconut chutney) to complement a fish broth or
a bouillon bred mooroom (moringa broth).

Among Muslim families, it was customary during Eid celebration or when there was a wedding in the family to crush henna leaves on the ‘Roche Cari’ to make Mehendi (henna) that girls wore on the palm of their hand and on their feet as decoration.

The Roche cari is such a core part of our cultural identity. Many Mauritians who have a Roche cari value it as a treasure. Some of them have been using one that they have in their possession for more than forty years and that has been passed on from mother to daughter or mother-in-law to daughter-in-law.

Like good wine, the baba Roche Cari that has been around a long time becomes better with age and develops an easily noticeable dark colour.

Most Mauritians will tell you that "masala crazé lor ros kari pli bon” (masala crushed on the rock is much better)."

The Roche Cari forms part of a culinary heritage left behind by our ancestors and holds a special place in the hearts of Mauritians.